Four Horses That Preceded the CPR

There is a little known history in the great story of the CPR . This video captures a small portion of that history and the accompanying article explains a little more.

http://www.huffingtonpost.ca/charlie-angus/four-horses-charlie-angus_b_4409913.html?utm_hp_ref=fb&src=sp&comm_ref=false
Posted by Unknown at 8:41 AM No comments:

This link connects with an article and photographs of the 10 worst rail disasters in Canadian history.www.theweathernetwork.com/news/articles/canadas-worst-rail-disasters/9272/
Posted by Unknown at 9:16 PM No comments:

When Infrastructure is Compromised

This is a story in the making.

Since Alberta faced the flash flood from excessive amounts of rainfall this past week , much of the infrastructure has been washed away or undercut .

This is a sample of what can happen. 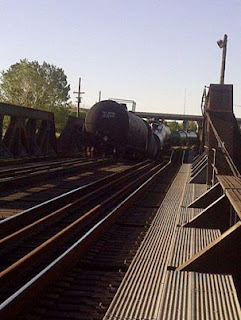 A train , carrying loaded oil cars , crossed  this bridge that only days before had waters flowing over it at over 5000 litres per minute. A force of water that washes away mountains.

Early this morning , the bridge began to collapse in the centre. It has dropped just less than a metre (2.5 feet) and is slowly making its way to total failure.

Meanwhile 4 full oil cars sit perilously above the Bow River. The rail rescue crews have wired the tankers together to hopefully hold the cars in place should the bridge break away under them.  They hope to drain the cars of weight before they end up in the river, causing an environmental disaster.

My question: why are they moving trains over a bridge without proper inspection?

I think the oil companies want their product moving and the monies rolling in.

I think the railway company made a bad decision for the sake of a customer's demands.

I think no consideration was given to the environmental hazard it posed or the cost of this venture.

I expect the profits won't cover the cost of this one.

Of course I hope that the rescue crews can get the job done .

If you have the time, you might wanted to listen to this CBC radio Living Out Loud episode aired Feb. 15 ,2013. It has the words and reactions of ordinary people travelling the last run of the Northlander in Northern Ontario .  Listen to the whole podcast for a little excitement and fright on this program called 'Different Trains-Different Tunnels'.

http://www.cbc.ca/livingoutloud/podcasts/
Posted by Unknown at 2:08 PM No comments:

On this day in 1885 , the CPR completed it's telegraph from coast to coast . Finally reaching Vancouver , British Columbia.