When early French Explorers entered the Mattawa area , the Fur Trade began as a sideline to the search for an easier route west to China . Champlain convinced the French courts that fur was the value that the new world provided . He received permission to develop the industry and settlement to enrich France . Making use of the existing trade network , Mattawa became a place where furs were gathered for the last leg of the journey by canoe to Montreal .
Since , the French population was not large enough to physically cover the territories , aboriginal peoples

The Northern Line out of Mattawa - History Before Contact

The railway played a key role in the development of the northern territories along the Ottawa River . Mid-north and north Ontario/Quebec were still part of the Northwest territories at Confederation 1867 .

People often believe that the CPR was built in one great push westward , and that was the beginning . But , this is not entirely true . Talk of railways started earlier by twenty years before the push . After 1870 , many small railway lines had been built in what now would be considered small runs throughout Upper and Lower Canada and the Maritime Provinces .

One of these lines , The Canada Central Railway

Handy with a Needle

Mum came with skills of her own to the bush of Northen Ontario/Quebec from wartime England . Her stint on the farm and in the British Army gave her particular skills that turned out to be essential in the isolated places in Canada .

Flour came in 50 and 100lb bags made of sturdy (500 thread count) cotton with the company name stencilled onto the front and sewn shut with cotton string . Once the flour of each bag was used up , she harvested the remains -a yard and a half of cotton fabric and string .

On Wash Day , she would scrub each bag

Read more »
Posted by Unknown at 9:10 AM No comments: Links to this post

A blessing in Canadian Shield country was the blueberry . From the end of June until mid-August , depending on where the patch was located , delicate white flowers on short,woody shrubs transformed in blueberries . Full , juicy and free for the picking !

Along the railway line , blueberries were quicker to ripen because the extra heat absorbed by steel rails and the railway bed created a microclimate that allowed the berries to develop earlier .
Away from the tracks , the tops of granite outcrops

Read more »
Posted by Unknown at 2:51 PM No comments: Links to this post

By the Light of the Coal Oil Lamp

There is a lot of night in the northern winters . With no electricity , the coal oil lamp was the primary source of light , if you wanted to see anything before 8:00am and after 4:30pm .

The switch lamps used coal oil to ensure that trains could see if switches in the rail were open or closed along the route . Prismatic coloured glass amplified the signal's warning distance .. Part of Dad's section job was making sure the switch lamps were full and lens cleaned of soot , using coal oil itself to do the cleaning . He checked the lamps twice a day .

As well , because there were no flashlights ,  a coal oil lantern lit Dad's way at night on his freezing walk

Read more »
Posted by Unknown at 7:26 PM No comments: Links to this post

Section houses were all built around the same time in CPR history -the last two decades of the nineteenth century after the company received the Government Charter to build the coast to coast railway to unite Canada . Homes sprung up along the line to house supervisors /foremen with families , overseers of local ( section) business . Some spurline homes were built later , but most were completed prior to WWI.
The basic floor plan was the same for almost all Section Houses - take a central-hall plan ; split it in half ;

Read more »
Posted by Unknown at 3:27 PM No comments: Links to this post 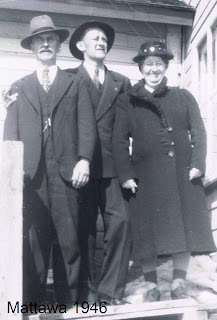 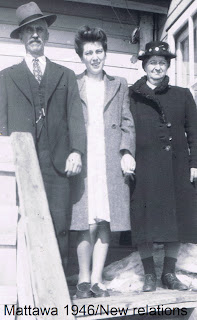 After Dad was rehired by the CPR , my parents spent a short amount of time in Mattawa , waiting to transfer to a location with an available house .
The CPR provided Section Houses along the line for Road Masters , Section foremen and occasionally other married sectionmen .  A  rental fee was taken off their pay once a month .  Dad was hoping that he could get into the Section House in Mattawa ( a duplex that housed the Foreman's family on one side and a senior sectionman's family on the other ) . But , neither would be available for several years . Dad's only opportunity to gain access was to put in his time in a remote location  where a house would be part of the package .

Read more »
Posted by Unknown at 11:34 AM No comments: Links to this post

HOW IT STARTED /SOLDIER WAR BRIDE/CPR

My Dad worked his whole life for the CPR. He began working for them  during the first years of WW II . At this time , there weren't many career opportunities in small Northern Ontario towns . Without means,privilege or a greater education , even in better times , the best a young man could hope for was a job in Lumbering or with the Canadian Pacific Railway .

Dad had lost his mother by the time he was nine years old , near the end of the Depression ,  the youngest of at least 8 - two sisters and five brothers in the home . His parents had owned a bakery which was reknown in the area . After her death , the bakery failed when his Dad turned to alcohol

True Tales from a CPR Section House - Why did I choose this title?

Having followed this blog on another site , a few have asked 'Why this name ?'

I am remembering many things from childhood , so I remember my true experiences ( thoughts/feelings/actions) from that point of view.

I have heard many of these stories often -from the point of view of different narrators-each influenced by their own experiences /needs .

As listener , my reactions differed because of my age and life knowledge , with each telling. So , I added new bits and facts , always understanding more than before .

Now I approach these stories as a sixty year old , whose life experience to this point has sorted out things a great deal more than I was able as a child .

I want younger ones to know the stories from my place , and untangle what they can with each hearing and retelling . I want them to picture it in their heads , under their own influence . I want that picture to clarify itself when their parents , grandparents , aunts and uncles remember and retell it their way .

Whose to know if it is truth or tale ? I am of the opinion that both words are essential to name the stories that I write here .

The truth is in the facts and the tale is in the telling .

This blog is only the next step in the ' tale-ing' of our family stories .