During the Wild Cat Strikes of 1964 , trains stopped mid-trip and the cars were parked on sidings for the duration . In Mattawa , just yards east of our house were two livestock cars : one filled with dairy cows ; one filled with pigs . 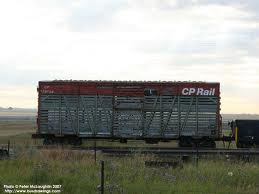 At first , having these animals near was exciting to us . Every spare moment was spent peeking through the spaces between the wooden slats at cows' soft eyes and pigs' wet snouts . After two days , this livestock , which should have been in the stockyards at Montreal the day before , began getting restless .
Cows began licking our hands for the salt on our skin with a frantic desperation. The pigs began squabbling among themselves aggressively .
Even as children , we knew that they were getting hungry and thirsty . No one had come to feed and care for them . They would be imprisoned inside these cars for who knew how long .
We began to worry . Our plan was to pick grass everyday and shove it through the spaces into waiting mouthes. Water was more difficult since there was no trough to fill . Little licks through the slats was all we could manage . This proved to be a long , hard process and we soon realized that we could not provide enough .
Each day when we went to check on them , we hoped desperately for an end to the strike . After the first week , we had raided the potato bin and the carrot bag to their bottoms . Try as we might , it was very difficult to ensure that each animal got something . Then , we swarmed the local crabapple tree until it was bare .
By the middle of the second week , the cows failed to take our meagre offerings . Their soft eyes turned vacant and unresponsive . Their tongues swollen in their mouthes . Some had lain down among the legs of others , too weak to stand any longer . They were just waiting for their end . And we cried for them .
The pigs had grown very aggressive and we did not dare risk placing our hands anywhere near their mouthes . There had been some hard fights among them . The carcases of the victims lay about the floor , too bloated for the living to feast on any longer .  Most pigs were still alive since they had a food source within there own prison . The small piercing eyes looked at us from between the slats , daring us to put our fingers forth . They were truly frightening to look at . We let them be . It was too late for them as well .
Even though my parents helped at first , experience had taught them that death was inevitable under these circumstances . Even when Dad had complained about the animals at the beginning , he was told there was nothing to be done .
When I think back , there were no animals welfare or rights groups to ride in and save the day . By the second week , I was wishing Dad would take his rifle and shoot them so they wouldn't suffer any longer . As much as he wanted too , he could not risk this .
By the time , the rotating strikes rolled past our area and the cars were pulled away , the cattle car was filled with bloated , stinking corpses . A handful of surviving pigs were physically strong but wildly insane and dangerous . They would not be leaving the car alive at the other end of the line .
Dad said that they would probably just burn the whole thing when the train got to Montreal .
Posted by Unknown at 2:45 PM