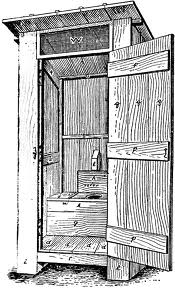 Before 1963 and the end of the steam locomotive , there was no running water in most CPR section houses . Daily human waste management was handled by natural composting and wood ashes from the kitchen stove in an outhouse .

The Mattawa outhouse was a two seater , which always seemed odd to me as we never shared the experience in groups .

There was a large hole cut into the bench seat for adult bottoms , and a smaller hole for smaller bottoms .

When I was about ten , I thought that I was old enough now to sit on the larger hole .  At first, everything appeared to be going well . I was feeling fairly smug that my decision was working . However , in order to reach for the toilet paper , I had to release my grasp of the front of the bench to pull tissue from the roll . That is where things went wrong .

The second that I let go , I slipped into the hole a good way before I was able to stop the sliding . There was nothing to grab that I could use to pull myself out of the predicament . If I dared release the compression of my flat hands ( now whitened from pressure) from the bench's surface , I was going down...down into the morass below...not an appealing thought...and definitely a terrifying one .

With my heels dug into the edge of the bench , I did all that I could do under the circumstances . I screamed the scream that would bring all mothers rushing to save their young . " Mum ! (wait) Mum! (wait)".

After what seemed like an eternity , my fear increasing with each scream  , as the release of air caused me to shrink a bit and slip further toward doom , Mum came racing to the outhouse in a panic . She yanked at the door which sent the hook and eye screw flying from the wood.

When she set her eyes on her girl child suspended by a virtual thread over the pit of doom - with just her feet , two arms and a head sticking out of the outhouse hole , she broke into peals of laughter at the sight . I ,on the other, hand broke into tears and cried " Help me , help me !"  How could my mother not recognize my situation . As I started to slip again , she grabbed me from a fate too horrid to imagine .

" Sometimes , you think that you're too big for your britches ," she guffawed . I was never going to hear the end of this tale at family gatherings for quite a while .
Posted by Unknown at 1:14 PM

Email ThisBlogThis!Share to TwitterShare to FacebookShare to Pinterest
Labels: outhouses